One of the biggest questions is whether you should bring in an outsider to run the business – and if so, when?  I have been helping family businesses to make just this decision – and then find the right executive talent to fit both the culture of the family business and its ambitions.

In this blog I want to look at a number of pieces of research around family businesses in the Middle East, including how the next generation sees their future, and how to recruit an external chief executive to ensure a sustainable future.

Are family businesses harder to run than traditional corporates? Of course, business is hard enough at the best of times, but when you add in family tensions, expectations and egos it can become a governance nightmare.

Deloitte’s EMEA Family Business Centre conducted in-depth interviews with almost 100 future leaders of family owned companies across Europe, the Middle East and the Africa region.  I am sure the findings will resonate with anyone running or working with a family business, wherever they are in the world.

The key finding was the ‘paradox of, for example, the desire to maintain and respect tradition whilst also striving to adapt and progress in response to changing business environments.”  A new generation is emerging with highly qualified young men and women, often with experience in other companies and abroad, facing new challenges such as internationalisation, innovation and digitization. But they also want to maintain the core family values of the business and respect the legacy of the generations before.

While this research and report are worthwhile reading, the interviews were all with the younger generation who were expecting to step into leadership roles at some time. What the report doesn’t really address is, what if the family members aren’t right for the future and would an external chief executive manage the business better?

Interestingly, despite the expectation of the younger generation taking over, only one in three of these businesses had a succession plan in place. 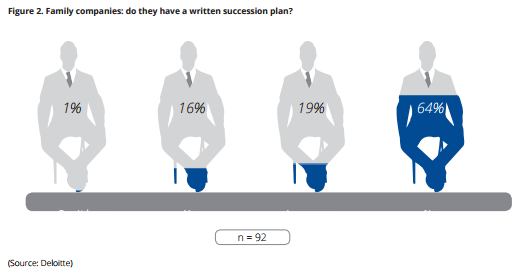 The other nugget is to see how this younger generation are thinking – a restless energy is definitely coming through!

But too often, the younger generation does not have the best future leader for the business.

As I am writing, I have been thinking of a story a friend of mine told me about one of the UK’s leading family businesses, built by the father. One child has no interest in the business at all – other than to receive a quarterly dividend payment.  One child is a very skilful non-exec and the third child is an operational director.  When the father died a few years ago, in unfortunate timing, the (external) chief executive was also retiring, which led to extremely sensitive discussions whether the ops director should become chief executive.

Everyone in the family and the business knew this director was no ceo material.  The non-exec sibling had to have a heart to heart with the director – knowing they were not really up to being chief executive.  In this case, everyone finally agreed – we bring in an external CEO.

Not a great basis on which to appoint your new chief executive?!  In this case there is a happy outcome but too often families muddle through a complicated situation and come up with a poor solution that doesn’t work for anyone.

The Cambridge Family Enterprise Group has written an interesting report on CEO Succession the Family Business: A Better Plan for Success.  They point out the biggest challenge for external CEOs, if they are not ‘in sync with the owners’ vision and values’.

They recommend initially clarifying what they are trying to pass on, or sustain through, the next generation – which could include real estate investments, philanthropic activities and even art collections. 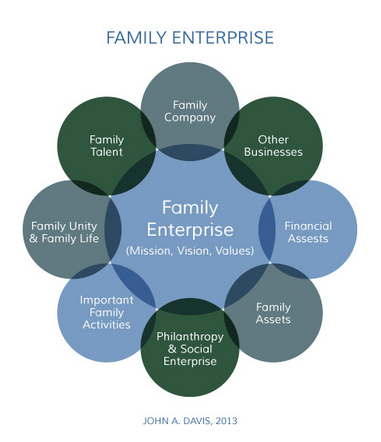 The authors give a very detailed process for planning through to succession.  While the theory is good, unfortunately I am not convinced the timescale and detail will actually work in most family businesses.

However, there is a good summary of the pitfalls to avoid and I have chosen a few of the ten which I think are particularly important

This survey showed that “family firms are continuing to establish processes to ‘professionalise the family’, including mechanisms such as shareholders’ agreements, family councils, and incapacity arrangements. Bringing in external managers is another way of professionalising the business; this takes on an added importance and urgency in the context of the ‘missing middle’.At the most basic level, better processes and a clearer division of roles and responsibilities frees up time and space for the senior team to think and plan more strategically.”

Some families are lucky enough to have an outstanding son or daughter who is an obvious successor – and will be the leader of the one in three family businesses who continue to succeed. 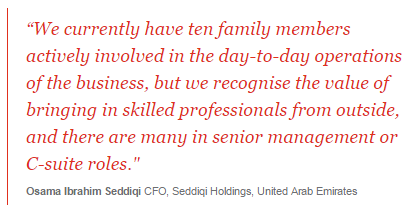