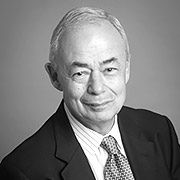 An expert on compensation policy, Michael Thibouville joined Metin Mitchell & Company from Gulf Investment Corporation in Kuwait. He started his career at Lloyds Bank Group in London and Brazil, before joining Inchcape Group as Worldwide Compensation Director, responsible for developing policy for 46,000 employees in 16 countries.

He later joined DHL as their Far East Head of Human Resources, based in Hong Kong, and USA-­based pharmaceutical drug testing company, Quintiles, where he was SVP Head of Worldwide HR.

Educated at Middlesex University and a Fellow of the Institute of Personnel and Development, Michael Thibouville has spent 11 years in the MENA region advising CEOs of leading banks, financial institutions and trading companies.

Michael is also a Freeman of the City of London and Liveryman of one of the oldest City Livery companies.